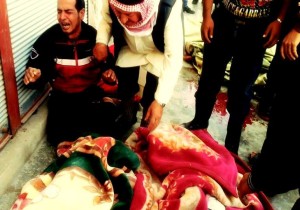 Relatives of victims of Jasim massacre today crying around the bodies

The Syrian army artillery also targeted the cities of Inkhal, Tafs, al-Harak and al-Sheikh Miskeen, as well as bombing of the town of Alma with tanks stationed in the town of Kharba Ghazala.

The bombing on the city of Jasim resulted in a massacre of 28 people to date and injuring at least 100 others, some of which in a critical condition. The first raid targeted a residential centre for refugees from towns surrounding Jasim and the second targeted the town hall, where a number of people gathered to register for access to humanitarian aid.

The names of the victims documented in the massacre of the town of Jasim today are as follows:

In addition to a large number of critical situations that have been transported overseas for treatment, with a high number of wounded and the transportation of many cases to various medical points in Daraa.

Burial of a child victim of Jasim massacre