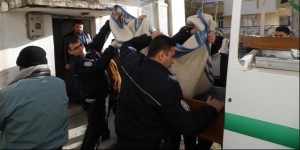 Five Syrian children died in their home located in the town of ‘Korkuteli’ in the city of Antalya southern Turkey, from suffocation by the carbon monoxide released from a coal heater.

The children took the allocated box to heat the coal into their room to warm it up, leading the smoke of the burning coal to poison them during their sleep.

Their bodies were taken to a state hospital in the area for examination Sunday morning and then later transferred to the city of Mardin and from there to Syria for burial.

According to information received, the family arrived to the town 15 days ago to work.