You are here: Home / Editors choice / An Ambush by Regime Forces Kills At Least Thirty People in Rural Hama 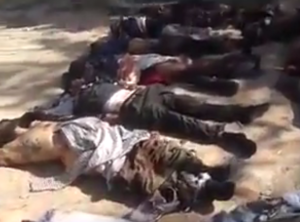 Refugees from Homs were victims of an ambush at the hands of forces loyal to the Syrian regime. According to witnesses who were part of the group that came under fire, but managed to escape; an estimated one hundred refugees were on their way to Turkey when they came under fire by regime forces, which led to the deaths of 30 people.

The ambush took place in the area of al-Silmiya (eastern rural Hama) and according to witnesses, the rest of the refugees who were part of the group, managed to escape.

Moreover a video was posted on the scene of a number of bodies that seem to come under fire from a short distance.

It has also not been possible to gain further details about the names of the victims or detailed circumstances of the ambush.