You are here: Home / Editors choice / A massacre at a Primary School in Rural Hama 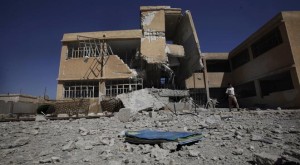 A grad rocket landed at Karnaz primary school in northern rural Hama, which led to the deaths of at least 10 children and injured dozens of others.

The injured were taken to Siqlibiya National Hospital, while the regime forces began closing the area surrounding the school.

The area is under the regime’s control and it is unknown who was responsible for the launch of the rocket that landed on the school.