You are here: Home / Editors choice / Massacre Committed by Syrian Army in a Primary School in al-Qaboun 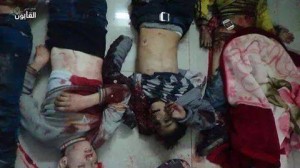 The Syrian army committed a massacre of children in a school in al- Qaboun district, after two missiles targeted the school, killing at least 16 children and injuring approximately 50 others.

The Katyusha rockets targeted Al-Haya primary school today afternoon in al-Qaboun neighbourhood in Damascus while the students were in their classrooms, causing a number of casualties and injuries of children and staff.

Al-Qaboun neighbourhood has been under the control of opposition forces for approximately two years.

The following names of some of the children causalities were documented: