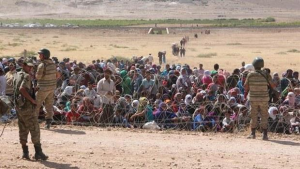 ISIS forces began their siege on the city of Ain al-Arab (Kobani) in Mid September 2014, approximately a week before the International Alliance attacks against Syria began.

The first attack began on the evening of 17/9/2014, in which ISIS occupied around 20 villages, covering its occupation from three points, and leaving the Northern point, adjacent to the Turkish border, as the only free window to the outside world.

The UN has warned that up to 400,000 residents of Ain al-Arab may flee to Turkey, making the number of people fleeing the besieged city the most serious so far in terms of the rate of flow of refugees for a single geographical area.

At the beginning of ISIS’ attacks, the Turkish authorities did not allow the refugees to cross into Turkish land. However, by 19/9/2014, the borders were opened and refugees were allowed to enter the village of Dakmdash. According to Turkish authorities, over 45,000 refugees entered on the first day via eight different border points.

Another number of the families of Ain al-Arab sought refuge in areas of rural Aleppo, before ISIS began its siege on the Western part of the city. A camp has been set up in the city of Afreen in rural Aleppo for the displaced from Ain al-Arab, with 200 tents initially set up.

In addition to displacement, residents of Ain al-Arab have also faced acts of summary execution carried out by ISIS in the past two weeks in the villages which it has seized. At least 40 executions have been documented within nine villages in which ISIS has control, including that of a child which ISIS accused of participating in military activities against the group. 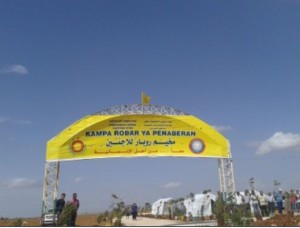