You are here: Home / Editors choice / Car Explosions cause Massacre in Primary School in Homs 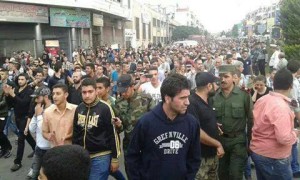 Families of the victims protest against Government’s failure to protect their children.

The Ikrimah neighbourhood in the city of Homs witnessed two explosions in front of a school yesterday, leading to the death of 45 people, among them 37 children. Over 110 were injured, the majority of them children.

A car carrying a military panel exploded close to the school. This was followed by another car exploding at the southern gate of the school as parents arrived to check on their children.

According to the official government narrative, the first car was a Mazda which carried three gas cylinders and exploded in front of the school, followed by a suicide bombing minutes later.

However, the official narrative has not been confirmed by any neutral side. In addition, no witnesses, among those which SHRC obtained, mentioned the finding of the body of the suicide bomber.

The school has two doors: a door facing the Shaam Road, which is the door in which the explosion took place, and another door which faces the Ikrimah neighbourhood. According to eyewitnesses SHRC obtained, the first explosion was that of a military car which the driver parked, left and then detonated remotely. After its explosion the families gathered in the area, and then the second car- a blue Mazda- exploded. 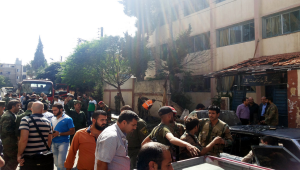 Most victims and injured were transported to the nearby Al-Za’eem hospital. Testimonies reported that the doctors failed to treat children that were Sunni, forcing their families to transport them to other hospitals for treatment.

Although the neighbourhood in which the school lies is home to a majority of Alawites, most of the children victims were Sunni. This may be due to the fact that the explosion took place at the gate closest to the Sunni area, and not the gate in which Alawites mostly live.

Unofficial media channels, loyal to the Syrian regime, have published the names of the victims of the massacre. They include the following: