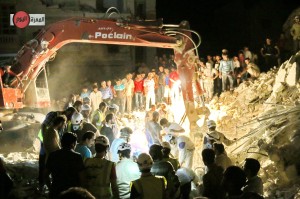 The province of Idlib and its suburbs have witnessed an increase in air strikes launched by the Syrian regime on residential areas, leading to large increase in the number of victims and injured within the last couple of days.

Airstrikes yesterday targeted a residential building and tailoring workshop in the northern district of the city of Ma’arat al-Noman.

The airstrike completely destroyed the building, and it took the civil defence over 20 hours to lift the debris and extract victims and the injured from underneath the rubble.

Nine were recorded to have been killed in this particular airstrike, among them an elderly woman, whilst 15 were saved, some of them in a critical position. The names of the victims recorded are as follows: