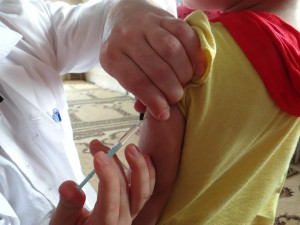 The vaccine campaign began yesterday, launched by the Ministry of Health in the Interim Government and UNICEF. It aims to vaccinate more than 1.5 million children in the areas which do not fall under regime control.

The Health Directorate of Idlib, affiliated to the Department of Health in the Syrian Interim Government, said that the second drive in the Measles vaccine campaign was stopped in all areas which do not fall under regime control, after the first case of death was recorded at 10.30 on Tuesday morning, 16/9/2014.

The directorate also clarified that all fatalities were centred around Jarjanaaz and its branches. No injuries or deaths were reported in other areas.

The Health Minister of the Interim government announced the formation of a committee in partnership with the Justice Department and in collaboration with the medical organisations and bodies concerned to investigate the reasons behind this humanitarian tragedy.

The names of twelve of the children that died were published, including:

The first Measles vaccine drive took place around three weeks ago, and ended with no medical or health complications. It encompassed all “liberated” areas and around 60000 children took part.