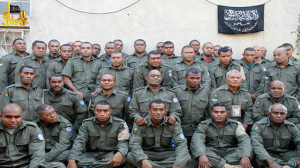 The Fijian soldiers appear in a video released by the Nusra Front a day before their release.

The Nusra Front has released the 45 Fijian soldiers which it had kidnapped on 31/8/2014.

Neither the Nusra Front nor the UN announced the official demands made by the kidnappers, but media sources say that it involved removing the Nusra Front from the list of organisations which the Security Council had deemed “terrorists”, paying compensation for a number of Nusra members that had been killed close to the UN troops headquarters, providing humanitarian relief to villages which were under siege in the Eastern Ghouta (rural Damascus), releasing a leading Nusra member who is currently detained by the Syrian regime, as well as the recognition of the state of Fiji and the UN that the soldiers were treated well.

However, Sami al-Areedi- a spokesperson for the Nusra- said that the soldiers were freed in fulfilment with a promise of security given to them by one of the Nusra leaders. He also added that the lifting of the Nusra’s name from the “terrorist” list was among the demands which the Nusra had hoped to achieve by abducting the soldiers.

The Fijian soldiers have arrived at “Point 80” in Al-Quneitra, controlled by the UN, via convoys which transported them from their place of abduction.

The Qatari government confirmed that it had helped release the soldiers, in line with its humanitarian values and in response to the request from Fiji.

UN forces have been stationed in Al-Quneitra since 1974.