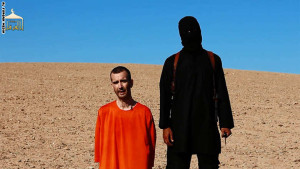 David Haines appeared in the same scene that Foley and Sotloff were filmed in.

The Islamic State of Syria and Iraq (ISIS) have announced the beheading of a third foreign hostage, in a series of video-taped beheadings that the organisation has undertaken since the USA began carrying out military operations against them.

In a video released by the organisation today, ISIS said it beheaded the British aid worker David Haines who was kidnapped in March 2013 in Syria- before the formation of ISIS- whilst he worked for the French agency “Acted”.

The video was taped in the same place in which the beheading of James Foley and Steven Sotloff took place, and the same armed British man who conducted the previous executions also beheaded Haines. The absence of any sound of wind has also been noticed in all films- something strange, as the sound of wind is always present in videos taken in desert areas. The performance of the executors was also remarkable in terms of maintaining their cool and their ability to deliver whole speeches in support of ISIS without any reaction or engagement with the beheading process.

The video also showed another British hostage and aid worker called Alan Henning, warning that he would be the next victim if the British government did not respond to ISIS’ demands to stop targeting them.