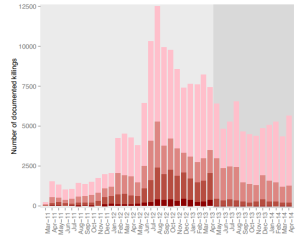 According to the statistics, August 2012 saw the highest number of names of victims recorded

The High Commissioner for Human Rights has published new statistics on the number of victims in Syria, a statistical update which was previously updated annually.

In early 2014, the Commissioner announced that it was to stop gathering statistics on the numbers killed in Syria due to the complex situation in the country, adding that the employees could not reach the areas in which killing was taking place in order to gather accurate numbers of the victims in the “war in Syria”.

The last time in which the Commissioner published statistics on the number of victims in Syria was in July 2013. It was mentioned at the time that the number of deaths had exceeded 100,000 civilians.

According to the executive summary issued by the commission, the commission solely includes victims whose names have been identified, as well as the place and date of their death. Data lacking these details is exempted.

The summary also mentioned that data provided by the Syrian regime was adopted between March 2011-2013 and that the commissioner sent requests for data to the Syrian regime in September 2013 and April 2014, however, it received no reply.

The report added that the Commissioner counted 191369 victims whose complete details were compiled, and that 85.1% of them were male, 9.3% were female, and 5.6% was of unknown gender.

As for the ages of the victims, the report said that 83.8% of their database did not specify the age, although the commissioner does have 2165 names of children under the age of 9, and 6638 children between the ages of 10-18.
The executive summary clarified that the number of victims in Syria could be much higher than the figures provided by the commissioner; the reason for this being that much of the killing taking place was not documented by the sources upon which they rely, and that the full number of those killed should encompass both victims whose names were identified and those who remain unidentified. The report also mentioned that mass killings (such as massacres, victims of shelling etc…) are given greater attention and their victims documented, whilst sole and individual killings are not always documented.

On another level, the data adopted and documented by the commissioner can be distorted with inaccuracies due to a number of factors, the most important of which is the repetition of some of the names of victims or the names of victims whose reason of death was not due to the war and conflict. In addition, some names were found of people who were alive and had not been killed. However, these names are no more than one thousand names.

SHRC also stresses the importance of the commissioner in fulfilling its duty in prosecuting criminals through the tools provided by the International Law of Human Rights and the International Criminal Law. The commissioner should not simply be satisfied with compiling statistics, although this is an important and essential effort in achieving justice.