You are here: Home / Editors choice / ISIS beheads a Journalist Kidnapped by Al-Nusra 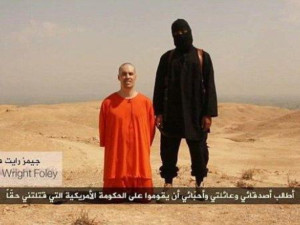 ISIS has published a film in which it records its slaughter of the American journalist James Foley, saying that it is a clear message to the American President Barack Obama to change his plans in targeting the group.

The recording contains the last speech of James Foley, who was wearing an orange suit, in which he called upon the American president to stop targeting ISIS, and in which he also sent a message to his brother who works as a pilot in the American air forces.

The video also showed a masked officer of ISIS, who spoke in English (in an accent which experts said was from London, UK), saying: “The reason for the execution is due to the airstrikes commanded by the US president Barack Obama against the fighters of ISIS, and which have helped the Kurdish and Iraqi forces in regaining control over the Mosul dam and its surroundings.” Following this speech, the officer beheaded the journalist and held his head.

In the video, ISIS also warned that it will kill another American called Stephen Joel Sutlov, who appeared in the video on his knees whilst wearing orange clothes. An armed and masked ISIS officer held his neck from behind. ISIS said that the fate of Sutlov depends on the next step of the American President.

The journalist James Foley, who was 40 years of age, was a freelance journalist who covered the war in Libya before going to Syria to cover for the “Global Post” and other media channels. He also reported for France Press a number of times during his stay in Syria.
On 22/11/2012, Foley was stopped close to the city of Taftanaz by four armed men with Klashinkovs, thought to be of the Nusra Front. His driver and translator were later released. At that point, ISIS had not been formed, which means that the abductors of Foley defected from al-Nusra, or that they sold him to ISIS.

SHRC condemns this horrific act by ISIS and offers its condolences to the family of James Foley, whilst also reminding the world that ISIS has slaughtered hundreds of Syrians since its inception as it is still kidnapping tens of activists and Syrian and foreign members of the media.

On this occasion, SHRC remembers the tens of Syrian and foreign journalists that met their death during the coverage of events in the last three years, and who put their lives on the line so that the truth may reach the world.

ISIS’ act of killing a journalist kidnapped in Syria confirms that the targeting of the organisation in Iraq, and not in Syria, is ineffective, and that the international community needs to take more serious steps in confronting this organisation, as well as confronting the Assad regime whose criminal acts has rendered their confrontation an international obligation, and not a responsibility upon Syrians alone.