You are here: Home / Editors choice / Violations at Checkpoints in Homs 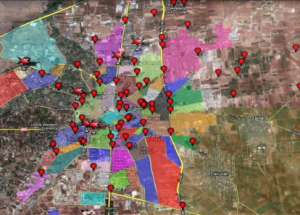 The “Girls for Peace” group in Homs has issued a report on the regime and Syrian security checkpoints in Homs, and the violations faced by civilians at these checkpoints on a daily basis.

The report also discussed the crimes of arbitrary detention and sniper shots carried out by snipers across the city, particularly those in Burj al-Gardenia, known more locally as “the Burj of death”.

Among the most prominent of violations committed at the checkpoints are the acts of humiliation enforced on those who pass by, regardless of whether they are men or women, or even elderly. Such acts include the thorough inspection of women, forcing them to remove their headscarves, searching of mobile phones and reading the messages within them.
Officers at the checkpoints also freely steal items belonging to civilians that pass by.

Checkpoints also forbid elderly civilians from crossing the checkpoints if they do not have a government employment card.

The report also mentioned that employees are suffering from the difficulty of crossing the checkpoints in their cars due to the intense investigation and search of cars which takes place and in which an officer will search all parts of the car, in addition to sometimes removing the doors and wheels! By the end of 2013, hundreds of cars would exit al-Wa’ar on a daily basis, whilst it is now impossible to exit without a security clearance- something which is very difficult to obtain.

In addition, checkpoints do not allow the children from al-Wa’ar to exit unless they have a security agreement- something which takes a long time and complicated procedures to obtain.

The report also discussed arbitrary arrests carried out at the checkpoints in Homs, and in which officers can arrest any passerby with no reason given to his/her relatives and companions and without informing them of the place of detention.

The report mentioned that the treatment at the checkpoints differs according to the moods of the officers, as well as the militia and officers stationed at them, and the orders they receive. It is possible that one person passes through a barrier, and yet is turned back at the next checkpoint!

The report dealt with a large number of cases and victim statements which narrated the different experiences they experienced in the checkpoints of Homs.

The report was published by “Young girls for peace in Homs”, a human rights group in Homs which works to document human rights violations in the city.

The report is available in Arabic here