You are here: Home / Editors choice / Leaked Video casts spotlight on Violations Syrian refugees in Lebanon are subjected to 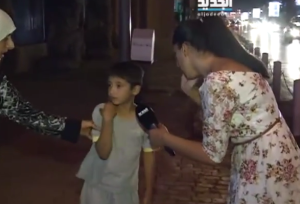 A leaked video which showed a Lebanese child beating a Syrian refugee child called Khalid, and being encouraged by elder people around him, has ignited much concern among those concerned in children human rights and human rights in general. However, the coverage of a Lebanese channel on the issue caused wider resentment, as it confirmed the absence of accountability and follow-up by the relevant Lebanese parties through conducting interviews with both Khalid and his relatives, and with the child Abbas who did the hitting.

The video of the children Khalid and Abbas was uploaded on the internet on 18/7/2014. On the evening of 19/7/2014, the Al-Jadeed channel broadcasted interviews it conducted with those involved in the incident during its evening news.
The answers of the child Abbas’ father were contradictory and hesitant. He mentioned that he was not the one telling his child to hit Khalid and that he did not know who it was that was encouraging the beating, yet later on said that his other sons and nephews had recorded the video. He also accused the relatives of Khalid for not bringing up their child and for not sending him to school based upon his wish. He also said that the police did not question him, and that his reference was Hizbollah and the Amal Movement.

The interview with Khalid and his mother reflected the huge pressures faced by the family which is stopping them from asking the law for justice. Khalid, the victim, displayed much fear, whilst his mother attempted to get him to speak to the interviewer. The interview also revealed the Khalid had left school due to the racism he faced there.

The manner of the presenter, Nabila Ghusayn, was shocking- in the ways that she attempted to prompt the father of the child Abbas in his answers, as well as her attempts to convince the mother of Khalid to let go of her rights, spinning the incident as a play between two children with no responsibility whatsoever on the adults involved.

The question of Ghusayn to the child Khalid: “what happened when Abbas was playing with you and began hitting you with a stick?” is a belittlement and mockery of the feelings of Khalid, who was feeling traumatised, as well as towards his relatives. Her manner displayed a disregard by all international standards in dealing with traumatised and abused children.

SHRC calls for the following:
– The necessity of the involvement of the Lebanese authorities in seriously investigating this incident, and to protect Khalid’s family from pressure and blackmail that they could be subjected to by armed militias in their area. Lebanese authorities should guarantee the protection of all Syrian refugees on Lebanese land.
– The importance of the relevant international bodies, especially the UN High Commissioner for Refugees and UNICEF to provide protection to Syrian refugees, and in particular, children.
– The importance of the civic Lebanese community in monitoring violations committed against Syrian refugees in Lebanon.