You are here: Home / Editors choice / Nine months since the Abduction of Razan Zeitouna 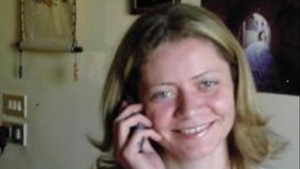 The abduction of the human rights activist Razan Zeitouna has sent shockwaves through the human rights circle in Syria, as despite the fact that civil, human rights, and media activists were being highly targeted at that time, all of this was taking place in North Syria and it was clear that ISIS were behind these crimes. This is whilst no cases of abduction had taken place in the areas controlled by the Syrian opposition in South Syria, with the exception of the case of Razan Zeitouna and her colleagues.

An armed and unknown group had raided the local environmental office and Centre for recording of violations of human rights in the city of Douma on 9/12/2013, abducting Razan Zeitouna and the ex-political detainee and activist Sameera al-Khaleel, the prominent activist and husband of Razan Zeitouna, Waa’il Hamada, and the activist, poet and lawyer, Nathim Hamadi. The abductors also stole their computers and documents, although they did not steal any money and other property which was in the office.

A number of sources have assigned responsibility of this operation to the group “Liwaa’ al-Islam”, the main armed group which controls Douma. However, on 12/12/2013, the group denied having any role in the abduction. No other group has claimed responsibility for this crime.

Razan Zeitouna is considered among the most prominent of human rights activists in Syria, and is one of the founders of the Centre for the documentation of Violations in Syria- one of the centres which strived to present data and statistics to the world on what has been happening in Syria since March 2013.

Zeitouna was born in 1977 and graduated from the College of Law in Damascus. She has been working as a lawyer since 2001, and assisted in setting up a human rights group in Syria in 2004.

In October 2012, the Ibn Rushd fund for Freedom of Thought announced that its annual award for 2012 was awarded to Razan Zeitouna, and in June 2014, the organisation “Vital Voices” awarded its International Prize for Entrepreneurship to Razan Zeitouna.