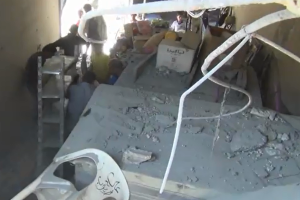 Civilians lift the rubble with their bare hands after an airstrike close to Az-Zuhoor Sweet Shop.

Syrian regime planes bombed the city of Ar-Raqqah for the first time after its retreat from the city in March 2013, after which Jabhat al-Nusra and then ISIS took over.

The airstrikes led to wide scale destruction of the buildings, as well the injury of tens of civilians.

A number of newspapers belonging to the opposition had published warnings yesterday that these areas may be bombed now that they were free of ISIS fighters. It is noteworthy to point out that the Syrian Regime does not bomb the headquarters or convoys belonging to ISIS, nor do they bomb the areas which it is in control of.