Over the last three years, Deir Azzour has been subjected to bombing with different weapons of war.
Picture taken from The Atlantic, 3/3/2013

The city of Deir Azzour is being subjected to a focussed attack by elements of ISIL, in addition to an ongoing and relentless attack by the Syrian regime.

ISIL retreated from most areas of Deir Azzour last February after vicious battles with other armed factions of the Syrian opposition. However, it began new counter-offensive attacks in April which are continuing till today.

It is clear that ISIL are attempting to take control of Deir Azzour, particularly as this would give them governance over Eastern Syria- areas rich with oil- and link them with the western areas they currently control in Iraq.

ISIL forces began attacking the city of Albo Kamal on 11/4/2014; however elements of the al-Nusra opposition resisted the attack, forcing ISIL to retreat to the T2 oil terminal which they control.

And on 9/6/2014, the battles extended from the village of Khusham east of the city, which led to the cutting off of electricity from the city. 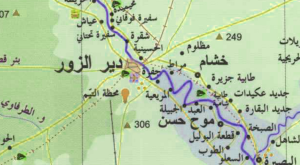 ISIL militias attacked Khosham, east of the city, leading to a cut out in electricity to Deir Azzour.

The continuous shelling from both the regime and ISIL on one side, and the siege imposed by ISIL on the city from another side (after the closing of the Northern crossing) has led to a strangling humanitarian crisis. Food and health access are dwindling away, particularly as they were already scarce materials due to the partial siege which the city has been subjected to for approximately two years and in addition to the relentless bombs being thrown on the city since 2011.

The province of Deir Azzour is suffering from a rapid decline in health issues, even from before the final siege began: the largest hospitals have stopped their services for over a year, and field hospitals suffer from a sharp lack of medical supplies and staff.

The decline in the sanitary conditions of the city and the spread of disease in it- particularly amongst children- in comparison to other Syrian cities is due to the dependence of the civilians of the city on the Euphrates as a source of drinking water, at a time in which the river has been transformed into a dump for toxic waste and especially oil refining waste.

SHRC, whilst drawing attention to the difficult humanitarian conditions in Deir Azzour, calls upon international organisations to cast light on the crimes being committed by the Syrian regime and ISIL against the civilians in the city, and calls for further aid to be sent to the city, especially when it comes to medical supplies and equipment which will purify drinking water.