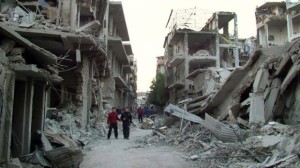 More than 60% of Syria faces elections. The other 40% will not face elections either because the area is completely destroyed (as with the district above in Homs) or because it does not fall under the control of the regime.

On 21/4/2014, the Syrian Prime Minister announced that the presidential elections in Syria will take place on June 3rd 2014, making it the first multi-party elections in the history of the country for more than half a century.

And on 28/4/2014, the Syrian President Bashar Al-Assad announced that he had submitted his papers for nomination, making him the seventh candidate to submit his papers. By 8/5/2014, the number of candidates had surged to 24 nominees.

On 10/5/204, the Higher Constitutional Court announced the names of the candidates which it had accepted: Bashar al-Assad, Maher al-Hajjar and Hassan al-Nouri. 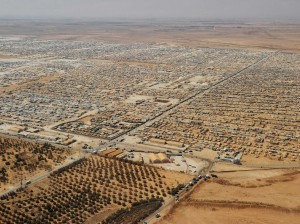 At least 5 million people will not vote due to their displacement from the country after running away from war crimes committed by the Syrian regime.

According to the official Syrian arrangements, the elections are overseen by a legislative higher committee. On 24/4/2014, the President Bashar al-Assad issued a decree in which he appointed the members of the “Supreme Judicial Commission for Elections” (SJCE) which will oversee the management of the presidential elections.

According to the General Elections law (issued in March 2014), the SJCE will ensure that the law will be implemented fully and will manage the presidential elections under the supervision of the Supreme Constitutional Court as well as overseeing the voting process and the measures specific to it. The SJCE also appoints the members of its branch committees and oversees their work. 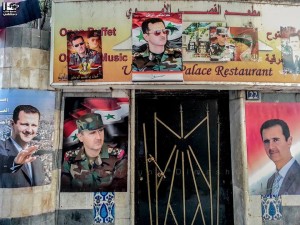 Shops have been forced to put posters in support of the President Bashar al-Assad. Damascus 28/5/14

The election campaign for candidates began on 7/5/2014, and will end on the evening of 1st July before the elections in two days, with the 2nd July being named the day of “election silence”.

The third paragraph of the 85th article of the constitution (voted on in February 2012) mandates that “A candidacy application is not accepted except if the applicant obtains a nomination written support for his candidacy from at least 35 members of the Parliament, and it is not allowed for a member of parliament to give his support to more than one candidate.”

The absence of Local and International Observers

The Syrian regime has refused to accept any monitoring committees for elections, as explained by Rida Mussa, a member of the SJCE, “Syria is a sovereign state, and we cannot accept any monitoring committee in our country for the elections.” He also said that they had invited members of parliament from “friendly countries” including Russia, China, Iran and Brazil as well as a number of South American Countries and countries in Asia instead of international observers, and that these countries had invited delegations to oversee the election process, according to what he said.

The Judge Mussa also added that after the polling period ends, the votes will be counted under the supervision of the branch committees of the SJCE, and thereafter the results will be sent from the centres, so that the final results can be announced via the SJCE.

In addition, the Central Committee for Elections in Russia announced on 29/5/2014 that it will send a delegation of observers to Syria to monitor the elections, and that the Syrian side had attached a great amount of importance to the Russian observers.

The Votes of Syrian Abroad

On 31/5/2014, the Syrian foreign minister said that the elections had taken place in 43 Syrian embassies abroad, with a record of 95% participation from citizens whose names were recorded at the embassies.

Indeed, a number of embassies had opened their doors on 28/5/2014 for the participation of the Syrian community in the presidential elections, whilst a number of countries forbade the Syrian embassies in their lands from taking part in the elections.

However, even this official number provided amounts to less than 5% of the number of Syrians living abroad.
It is noteworthy to mention that these official figures are impossible to verify due to the lack of any external monitoring. 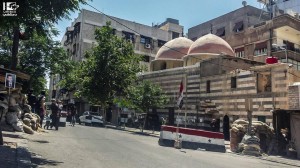 checkpoints in regime controlled areas stop cars which do not show support of the President Bashar al-Assad, as does this checkpoint in Al-Midan, Damascus, 6/5/14

The elections being ran by the Syrian regime disregards all the minimums in the organisation of elections, lacking the formal procedures which should be in place to meet the most basic international standards to ensure the integrity of elections.

The supreme constitutional court has not committed to the conditions for candidacy outlined by the law with regards to the President Bashar al-Assad, accepting his candidacy despite the fact that he is married to a woman that has a foreign nationality.

In addition, the lack of regional and international monitoring makes the whole process lack credibility.

The elections are also taking place whilst approximately 5 million citizens have been displaced outside the country. It is also estimated that around 150,000 civilians have been killed in the last few years, and that around at least 50,000 are missing, either in the prisons, or from among those who have been summarily executed in prisons in field executions.

Furthermore, the Syrian regime which is running these elections has- since more than three years- been shelling Syrian cities with explosive barrels and airstrikes, and has used internationally forbidden weapons against its own citizens- who are supposed to the (majorly) displaced electorate who will vote in the elections!

The Syrian regime is estimated to lack control of 40% of the Syrian land, and it cannot- even from a theoretical perspective- open any polling stations within this land. 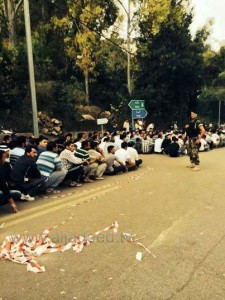 Syrians forced to take part in a rally in front of the Syrian embassy in Beirut, 28/5/14

Blackmailing and Terrorising the Displaced

The Syrian authorities have been operating an organised campaign since the beginning of May 2014 in which they are forcing the citizens in areas which do not fall under its control to show support for the President Bashar al-Assad, through forcing them to stick posters on their shops as well as holding placards and sticking leaflets on their cars and houses.

SHRC has come to know that citizens from Damascus have been subjected to interrogation at a checkpoint in the capital due to the fact that their car had no posters of the President on it. They were stopped and humiliated for an hour, before they managed to get through to a relative that had strong links with the security and who managed to free them in the evening.

In another incident, the Political Security Branch in Damascus called some young girls for interrogation due to the fact that they had been absent from their school when the school was participating in a rally to support the president.
And in Latakkia, security elements called shop owners and forced them (with the use of weapons) to take part in a collective dance in support of Bashar al-Assad, whilst an official media channel recorded the dance.

SHRC also recorded tens of incidents in which in Syrians in Lebanon were forced to vote via threats of imprisonment and torture which they received from Hizbollah militias. The refugees there were sorted into groups and each group supervised by a Hizbollah guard to ensure that they would take part in the rally organised by Hizbollah in front of the Syrian embassy on 28/5/2014, and throughout the whole day.

SHRC has also learnt that a number of Syrians in Jordan requested some documents, and were told that these documents would be provided to them after the elections. They understood this as a threat, which made them take part in the elections due to the fear that their documents would not be given to them, and with the knowledge that all Syrian embassies do not hand over documents, including passports, to any individual that takes part in opposition activity.
SHRC also documented that the Syrian embassies sent letters to students on scholarships, ordering them to be at the embassy for the duration of the Election Day which took place on 28/5/2014.

SHRC, points out that the Syrian regime lacks legitimacy in principle as it came to rule via a military coup, followed by many forged referendums in which the president always gained 99% of the vote!

SHRC also confirms that the elections lack the minimum requirements used in the election process and that the elections are taking place on Syrian blood, as the President poised to win has issued commandments to directly kill tens of thousands of Syrians, and issues orders on a daily basis in dropping explosive barrels on civilians in Aleppo, as well as issuing orders allowing the use of poisonous gases against civilians. He is also directly responsible for the arrest of tens of thousands of Syrians, and killing thousands of them under torture through the use of inhumane methods and unparalled brutality.

SHRC also points out that millions of Syrians live outside Syria or are displaced within the country due to war crimes and crimes against humanity which have been committed by the Syrian regime throughout the last three years. SHRC calls for the following:

 The importance of all organisations to work hard to transfer the Syrian file to the ICC; as the Syrian president should be standing in trial at the court as opposed to standing for the country’s elections!
 The importance of all human rights organisations to cast light on the serious crimes being committed in Syria, and to educate the masses in various countries in order that they put pressure on their policy makers to stop the blood in Syria, and not just be satisfied with condemnations and negative viewpoints!
 The importance of the international community, and especially the “Friends of Syria” to solve the issue of personal documents for those who oppose the Syrian regime, so that these papers are not used as blackmail and a way to threaten citizens.