You are here: Home / Editors choice / Stealing the Possessions of Families: A Systematic Policy with Official Approval 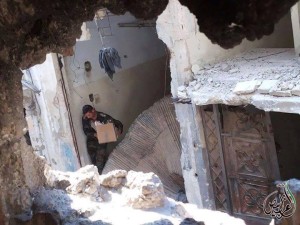 Since the beginning of the Syrian crisis, persistent reports have documented the looting of household possessions by regime forces. This takes place particularly in areas in which the original population has been displaced and in which burglary operations seem to be carried out in a systematic and organised manner, appearing to be a formal approval of the official institutions which these forces are part of. This phenomenon has become known as “al-Ta’feesh”, a word derived from “al-Afsh”- a popular term used for home furnishings.

In addition to the stealing of furniture, army and security forces are also stealing from shops located in areas opposed to the regime, and in which some shopping centres have been completely burgled such as “City Centre” in Jurat al-Sheikh in Homs, which was looted entirely before it was burnt down on 16/5/2012. The city of Saqba in rural Damascus, which was famously known as being the largest centre for selling furniture in Syria, was also subjected to an organised looting operation by army forces and the shabiha 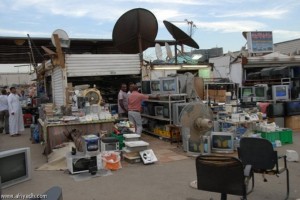 With the spread of the phenomenon of the looting of civilian furniture and goods in areas opposed to the regime by the army, security forces and local militias; markets for selling stolen furniture have appeared in areas loyal to the regime, especially in Homs, Latakkia and Tartous.

The sellers in these markets do not keep the source of their products a secret, and the buyers are well aware of where the products come from. In addition, these markets are often named in a way which shows that the products have been stolen!

Stealing the Possessions of the opposition: an Ongoing Policy 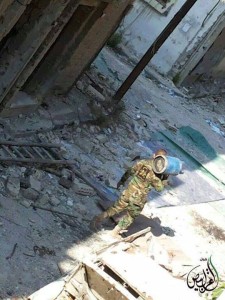 The Syrian regime is using the practice of stealing individual possessions as a punishment for those who oppose the regime.

The Syrian regime has used the policy of stealing the possessions of the opposition (and those who are sympathetic to them) in an organised manner over the past couple of decades. The Syrian security has seized thousands of houses and lands which belong to those who oppose the regime, and has given many of these homes to officers and members of the security and army.
As the decades have passed, the owners of these houses and lands have not been able to regain ownership of their possessions, as even asking for them would constitute a crime which could lead to prosecution.

Reports prepared by SHRC in previous years have also shown that in previous years, civilian houses in Hama in particular, were subjected to looting by army and defence forces during the Hama massacre of 1982 and afterwards. Before that, thousands of homes in Aleppo were also targeted in the famous liquidation of the city which took place at that time.

Al-Ta’feesh: A Policy to Appease the Supporters of the Regime 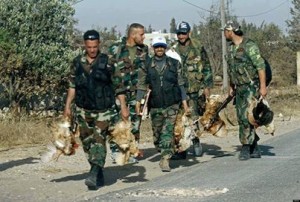 Members of the Syrian army have no issue in stealing everything they can from civilians.

The reports and witness accounts documented by SHRC all show that over the last three years, the stealing of possessions is a systematic policy practised by the military and security apparatus with official approval from the higher forces in these institutions.

Eye witness accounts from defected soldiers of the Syrian army also point to the fact that the stealing of possessions and giving them out to soldiers and security elements is one of the basic economic incentives that are used to compensate for the low salaries that the soldiers are receiving, including both official employees as well as foreign elements used in local and foreign militias.

This appeasement policy also includes selling the stolen items to families of the soldiers and security elements at cheap prices. SHRC has documented four markets which are almost always open in Homs, Latakkia and Tartous.
The crime of Ta’feesh is part of the policy of distributing gains among supporters of the regime, where the Syrian regime has to provide economic resources available to the minor order, to ensure they continue to serve and protect the higher ranks that get bigger gains.

Members of the army and its militias steal as much as they can, particularly electrical items and furniture, in addition to cattle. At times, they even unscrew doors and windows, which have now gained a new department in the markets specialised for stolen products.

Ta’feesh: a Crime Committed by the State! 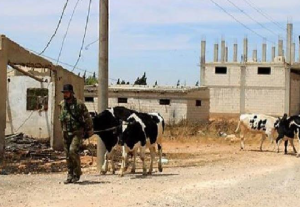 A member of the Syrian army pulls cows which he stole from a house in the rural areas.

The stealing of personal possessions, or even the use of them without permission of the owner, is a crime in all national and international laws, including the Syrian law (see articles 534-621 for the details and punishments of this crime).
In accordance with the description of “stealing” mentioned in article 621, SHRC notices that the activities carried out by members of the Syrian army, security and their local and foreign militias all fall under this description, including the moving of other people’s possessions without their consent, and with the knowledge that they do not have a right to move these possessions.

However, the operation of collective stealing taking place by these apparatus- which are expected to protect the law- forms a crime which surpasses “organised crime”, as the national and international law has not dealt with a collective robbery of this scale, and especially as this crime takes place following the committing of war crimes against the owners of the items which are later stolen!

The crime of collective looting organised by regime forces and its militias shows the transformation of the army and security forces into an unprecedented criminal apparatus, highlighting the clear need of the international community to step in and stop the series of crimes and vast violations taking place in Syria.