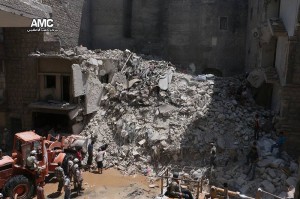 Civilian groups continue to search for survivors with limited resources, amongst the rubble of a collapsed building in Bustan al-Qasr.

Syrian helicopters have dropped explosive barrels behind the al-Basri mosque in the district of al-Maghayeer in Aleppo, leading to the death of tens of civilians and injuring at least 15, as well as destroying three residential houses.

And in the Firdaws district, helicopters dropped explosive barrels on an empty residential building, destroying two of its floors.

Explosive barrels were also dropped on Bustan al-Qasr in Aleppo on the evening of 26/5/2014, leading to the death of 25 civilians when a residential building collapsed in its entirety. Till now, elements of the civilian defence are searching for survivors amongst the rubble.

In addition, 15 people were killed after a barrel was dropped on the al-Intharaat district and another barrel targeted Bani Zaid, bringing the death toll in Aleppo on Monday to 50 civilians killed.

During the last couple of days, Aleppo has witnessed the fall of no less than 40 explosive barrels in its eastern quarter as well as the rural areas outside the city. These areas do not fall under the control of the Syrian regime.

It is also noted that the civilian defence groups which operate in the areas controlled by the opposition are suffering from a severe shortage in equipment and material resources, particularly with the continuous and relentless attacks with explosive barrels which take place throughout the day, and since many months ago.