You are here: Home / Editors choice / After 699 days of Siege and continuous Shelling: An agreement allowing Fighters to leave Homs 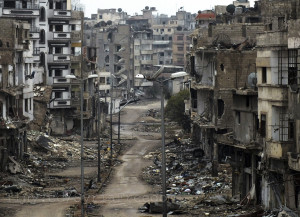 An agreement reached between opposition groups in Homs and the Syrian Regime, under the auspices of the United Nations, has allowed fighters inside the city of Homs to leave. This agreement however, does not include the neighbourhood of al-Wa’ar, which is controlled by opposition fighters.

The reaching of this agreement was announced on 4/5/2014, after a series of meetings, both direct and via intermediaries. The agreement allows for the exit of 2250 fighters, with their individual weapons and personal bags, for the exchange of the release of 70 Iranian and Lebanese prisoners, as well as the breaking of the siege imposed by opposition fighters on the villages of Nubul and al-Zahraa in rural Aleppo.

After the fighters leave the old city of Homs, the majority of Homs will fall under the control of regime forces.
On 7/5/2014, the first group of fighters – around 120 individuals- left in three buses which headed towards al-Daar al-Kabeera in northern rural Homs, approximately 20km away from the city.

This agreement has been reached after two years of continuous siege on the old city of Homs, as well as continuous shelling which has not ceased since the beginning of the siege.

The siege of Homs

The siege on the old districts of Homs is considered among the longest periods of collective punishment in Syria during the revolution period. The siege began in rural Northern Homs on 25/5/2012, and it began on the city of Homs on 7/6/2012, and it then spread to rural western Homs on 9/7/2013, and remains so till today, amounting to 23 months or 699 days of imposed siege.

The regime forces and the foreign militias supporting it in implementing the siege did not allow any assistance to enter the city, except one international convoy which entered on 7/2/2014 as part of an international agreement which allowed a couple of hundred of civilians to be evacuated.

The districts in the old city of Homs are considered among those most affected by the siege, due to the lack of outlets leading to it, the high number of residents living there, and the lack of its own resources (such as agriculture), whereas this is less so for rural western and northern Homs.

The district of al-Wa’ar or “New Homs” is considered one of the neighbourhoods most affected by the siege. It is characterised by a large population, with around 400,000 residents before the siege began. 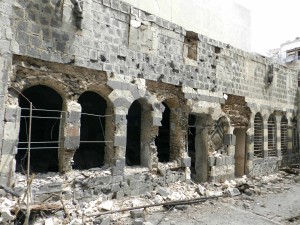 The Systematic Destruction of the City

The city of Homs has been subjected to violent and continuous shelling since the beginning of the siege, using all kinds of rockets and missiles.

The affected areas – estimated to be around 52km squared – have been subjected to great destruction, with most buildings destroyed in addition to the destruction of the infrastructure of the city.

The destruction encompassed archaeological and ancient sites in the old city, including mosques and churches, some of which are older than 1000 years.

In addition to the siege and arbitrary shelling, the civilians in the city of Homs and the surrounding area were subjected to intense operations of arrests, in addition to the massacres perpetrated in the city and in rural Homs, as well as the arrest and rape of young women, which led to hundreds of thousands of families to flee the city during the last three years, leaving only a couple of thousand in the city.

The Humanitarian Effect of the Siege and Destruction

The policy of the Syrian regime in imposing siege on the city of Homs for almost two years has led to a massive humanitarian epidemic. Previously, the population of the old city of Homs was estimated to be around 800,000 people. Now, no more than 1500 civilians remain.

The siege has impacted residents in a large way due to the cutting off of food and medical services.

SHRC estimates the number of people killed in the province of Homs since the beginning of the popular uprisings in March 2011 to be around 35,000 people, whilst the refugees and displaced from the city are estimated to amount to over a million people. 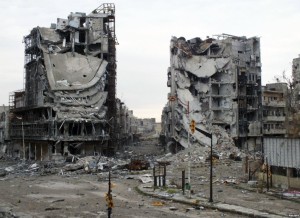 The crimes which took place in Homs led to the displacement of over a million, leaving only a couple of thousand in the city.

The Responsibility of the International Community

The international community bears direct responsibility for the war crimes and crimes of genocide which have taken place in Homs.

It is noticeable that all the systematic crimes committed by the Syrian regime against the city, as well as other cities, did not invite any serious action from the international community, with the exception of a number of press releases following a number of massacres witnessed by the city. However, these did not produce any international decision particular to the city, despite the fact that it has witnessed one of the worst crimes in the last few decades.