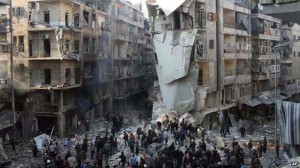 Following the massacre in which the Syrian regime used chemical weapons in the Eastern Ghouta on 21/8/2013, the Syrian regime had agreed to surrender its chemical arsenal, despite the fact that the Russian-American agreement prevented the “UN mission to investigate allegations of the use of chemical weapons in the Eastern Ghouta” of deciding which side had used these weapons, and recorded the crime as unknown!

The operation to dismantle the chemical weapons began in October 2013, and it continues till today. On 11/2/2014, Washington commented that until today, a limited portion of chemical weapons had left the port in Lattakia, and that these quanitities were far less than the 700 tons which the regime was supposed to have disposed of by the end of 2013.
The agreement in place provides that the Syrian chemical arsenal must be disposed of by 30th June 2014.

Poisonous Gases are a War Crime

The “Convention on the Prohibition of the Development, Production, Stockpiling, and use of Chemical Weapons and their Destruction” affirmed that this includes toxic chemicals, except where intended for purposes not prohibited under the convention, as long as the types and quantities are consistent with such purposes.

Chlorine is considered a chemical substance not prohibited under principle, as it is used abundantly in industries, and chlorine gas is not listed in the agreement with the Syrian regime to dispose of.

Yet, in all cases, Chlorine gas falls under the category of substances prohibited by the Chemical Weapons Convention if used in a military manner.

The International Criminal Court considers the use of poisonous gases as a war crime, as outlined clearly in the eighth article, that “the use of poison or poisoned weapons or asphyxiating, poisonous or other gases, and all analogous liquids, materials or devices” are considered war crimes. This is regardless whether these toxic gases lie within the category of substances banned altogether or banned for military uses.

Who is using Poisonous Gases in Syria?

It is clear however, that the use of Chlorine gas is being perpetrated by the Syrian regime, particularly as such attacks are taking place via war planes which the opposition do not own, as well as the fact that the chlorine gas is being used with explosive barrels- a clear evidence that these attacks are being planned and implemented by the Syrian regime.
In addition, the poisonous gas attacks being launched recently, as in line with chemical attacks launched previously, are targeting areas which fall under the areas controlled by the opposition. Moreover, every time an attack takes place, the regime rushes to accuse the opposition of carrying it out.

The use of Poisonous Gases in Syria

The Syrian regime has been using poisonous gases against civilians since 2012, when it was recorded that poisonous gases were used in districts of the old city of Homs in June 2012. It was also used later on a continuous basis in rural Idlib, Daraa, Deir Azzour and Aleppo.

Sarin and Mustard gas were used more so in previous attacks, before the use of Chlorine began to be used at the end of last month.

SHRC has recorded ten attacks in which poisonous gases have been used within the last 30 days, and in which it is thought that Chlorine gas was used. They are: