You are here: Home / Editors choice / Aleppo: the Destruction of a city under the Auspices of the International Community 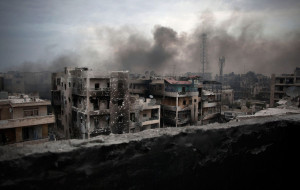 The district of Saif al-Dawla in Aleppo, October 2012

The city of Aleppo has been subjected to continuous and routine attacks since August 2012, transforming large neighbourhoods of the city into concrete dumps, and causing over a million inhabitants to flee.

According to the last government census in 2012, 4.6 million civilians live in Aleppo and its rural areas, making it the province with the largest number of residents in Syria. The central office for Statistics had predicted that by 2012, the number of inhabitants in Aleppo would increase to 6.2 civilians.

Aleppo is considered one of the oldest inhabited cities in the world. It is full of archaeological and historical sites; and in fact the whole section of the old city was classified by the UNESCO as a world heritage site.

The launching of explosive barrels on the city has been targeting the eastern districts of the city which fall under the control of the opposition. These areas also have a high population of civilians, and residential buildings are very close to one another. The result of this is a great loss in both human life and material resources. This is the opposite to the rural areas of Aleppo, in which most buildings are one or two storeys and are at a distance from one another.

The Syrian Human Rights Committee (SHRC) estimates the number of civilians killed by explosive barrels in Aleppo to be approximately 18000 people, since the first time they were used on the city in October 2011.

Destruction within some districts in the Eastern part of the city has reached 70%, whilst the infrastructure in the targeted areas has been totally destroyed. The number of buildings destroyed- both completely and partially- or are vulnerable to falling, are estimated to number to a million.

The Syrian regime’s use of explosive barrels in Aleppo has intensified since March, through continuous and repeated attacks, similar to that the city faced in December 2013. It is estimated that the number of barrels dropped on the city since 21/3/2014 and until the publication of this report amount to approximately 410.

Explosive barrels are made out of large metal packaging stuffed with explosive materials, in addition to metal parts, screws, and so on. One barrel weighs around 200-300 kg. Helicopters are mainly used to drop these barrels, flying at a height of between 5000-6000 feet so that they are not targeted by the anti-aircraft weapons launched by fighters opposed to the government. Helicopters are unable to drop barrels on its target with precision. Due to this, many barrels which are dropped fall on empty areas, whilst at other times; barrels will fall on the same area repeatedly before the target- most likely, a locality packed with inhabitants- is hit.

The reason for the increased use of these weapons by the Syrian regime is due to the low price of their manufacture, in contrast to rockets which are expensive. In addition, barrels destroy a larger area upon impact. 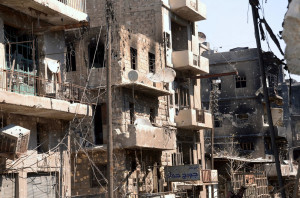 The Responsibility of the International Community

The Syrian authorities have been launching systematic attacks of destruction on the districts of Aleppo since the end of 2012 and until today with the use of explosive barrels, air strikes, and continuous tank shelling.

The international community has assisted in this operation of destroying Aleppo through the following aspects:
Not taking serious action on war crimes which the city has witnessed, as well as other cities. The international community has not reacted seriously to any of these crimes, whilst the western capitals have simply expressed their “concern” every couple of months!

Furthermore, the Security Council has not issued any decree specific to the city of Aleppo, despite the huge amount of destruction and loss of life it has been subjected to, and the resulting movement of displacement- estimated to have affected a quarter of the city’s inhabitants.

The refusal to provide the opposition with weapons that can counter the helicopters, or to interfere with the regime’s planes electronically, as happened in Iraq during the second Gulf war. This is despite the fact that the helicopters attacking both Aleppo and other cities are no more than 70 helicopters. 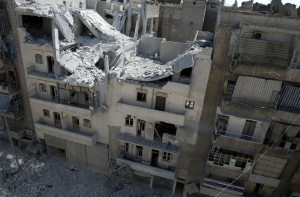 Thousands of buildings in Aleppo are susceptible to falling down due to partial destruction or destruction of the infrastructure. Many buildings have also been affected by the destruction around them.

SHRC calls upon all international organisations and countries to seriously deal with the war crimes taking place in Syria. The crime of the destruction of Aleppo has surpassed that of the use of chemical weapons in the Eastern Ghouta, due to its current and future consequences, and due to the wide scale damage caused.