You are here: Home / Editors choice / PKK Continues its Attacks on Arab Villages in Al-Hasaka 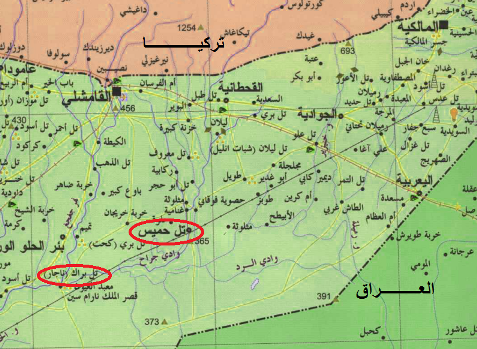 After its control on the village of Tal Baraak on 22/2/2014, the PKK forces launched another attack, this time on the villages of Tal Baraak: Tal al-Furs, Smeehan, ‘Akr and Dafy. This attack was launched in parallel to the tens of air and rocket attacks launched by the Syrian regime forces on Tal Hmeis, Tal Baraak and the surrounding villages, in addition to the rockets launched on Al-Qamishli.

Activists in the area confirmed attacks on 147 Arab villages in Al-Hasaka, in addition to the Kurdish villages in the area.
On 1/3/2014, PKK forces attacked a number of Arab villages, during which they raided and burnt down homes. Houses which were burnt in the village of al-Rahia al-Sagheera were documented, and documentation on the operations which took place in the other villages is being awaited.

(A list of the names of people whose homes were burnt down can be found in the Arabic section).