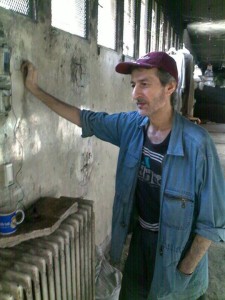 The longest detained political prisoner in Aleppo, Ahmed Hamdo al-Mahmoud, died today, after spending over 25 years in the prison since his abduction in 1988.

Al-Mahmoud was arrested after he was released from the army prisons- which cooperate with Israel- in South Lebanon, and in which he was detained during his mandatory service in the Syrian army in Lebanon. Al-Mahmoud was not provided with any accusation during the quarter of a century that he spent in prison, nor was he sent to the court, similar to thousands of prisoners that spend long years in the regime prisons.

Al-Mahmoud spent most of his time in Tadmur and Sednaya prisons, before he was transferred to Aleppo Central Prison last year, after Sednaya Prison was closed down.

Al-Mahmoud died from cancer, which he combated with for a long time, and with no medical services provided in the prison. In the last month, more than 20 prisoners died from cold and ill nutrition.