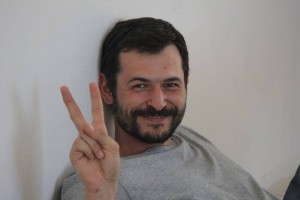 The Syrian Human Rights Committee (SHRC) has come to know that the Polish journalist Marcin Suder, who was abducted on 24/7/2013, escaped from his captivity. He was abducted when an armed group raided the media office of Saraqeb (Idlib), and began beating the activist Manhal Barsh, and then abducted Suder, who was training media activists in the office in photography skills. The armed group also robbed the resources in the office including the computers (which contained many files) as well as whatever money was available. Until now, it is not known who this armed group is.

A number of journalists and activists remain kidnapped in opposition-controlled areas, and nothing is known of their whereabouts, including Father Paulo and media activist Obaida Batal- whom many believe were abducted by ISIS.

SHRC, whilst congratulating Marcin Suder on his freedom, calls upon all civic and political fronts in the areas which do not fall under the control of the Syrian regime to do their utmost to release all those kidnapped, and secure freedom for those working in the media and activists in the area.