You are here: Home / Articles & studies / The sarin gas attack is just one Syrian atrocity the ICC should pursue 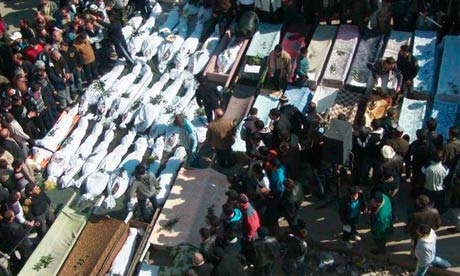 Mourners gather around coffins and victims killed in the bombardment of Homs, Syria, in early 2012. Photograph: Local Co-ordination Committees in Syria/AP

As graphic images of adults and children writhing in pain began to emerge from Syria the morning of 21 August, it quickly became clear that an act of bloodless but savage brutality had stolen hundreds of lives from opposition stronghold towns just outside Damascus. A Human Rights Watch’s report (pdf), based on independent analysis and documentation, released late last week found that available evidence strongly suggested the cause was a chemical weapons attack and that the Syrian government was responsible.

A UN investigation, released earlier this week, confirmed use of military-grade Sarin. In accordance with its limited mandate, it did not name any party as responsible for the attack. But key details from the UN report, including the direction from which some of the rockets probably came, enabled HRW to plot their path convergence on a well-known military base of the Republican Guard 104th Brigade.

So now, after more than two years of diplomatic paralysis at the UN security council and a credible US threat of a military response to the 21 August attack, Russia is showing renewed vigor to engage diplomatically. The potential deal, now awaiting security council discussion, could be promising. And eliminating a previously unacknowledged – and reportedly substantial – stockpile of inherently unlawful weapons would be a significant victory. It would also be something of a victory for Syrian civilians, as the very real threat of additional chemical attacks could disappear.

But the destruction of President Assad’s chemical arsenal would do nothing to protect Syrians from death by conventional means, including artillery shells and cluster and incendiary bombs – which have killed far more civilians than the 21 August chemical attack. Routine massacres and summary executions have also contributed to Syria’s remarkably high death toll.

For example, in early May 2013, Syrian government and pro-government forces executed at least 248 people in the towns of al-Bayda and Baniyas, which sit along the coastline. An overwhelming majority of these people were executed after military clashes had ended and opposition fighters had actually retreated. Once the fighting was over, government and pro-government forces entered homes, separated out the men and executed them at close range. In some cases, they burned the bodies they had just shot.

Although particularly gruesome, this type of massacre is not an isolated event. The government also carries out indiscriminate, and in some cases deliberate, air strikes against civilians. It targets crowded bakeries and hospitals in opposition-held areas, often far from legitimate military targets. Opposition forces have also committed serious abuses, increasingly resorting to executions and indiscriminate shelling of government-held areas.

Given the singular focus on chemical weapons by concerned governments, Assad may calculate that he has even less reason to fear the international reaction to such massacres. Without a concrete mechanism to provide a measure of justice for victims, the cycle of violence – whether by chemical or conventional means – is reinforced.

One step that could make him reconsider is if the UN security council referred the situation in Syria to the International Criminal Court (ICC), which could investigate alleged atrocities by all sides to the conflict. Such a referral would put muscle behind the statements from leaders the world over who called, in the aftermath of the chemical weapons attack, for accountability.

Sixty-four countries have already called on the UN security council to refer Syria to the ICC. Notably, six of the 15 security council members have also expressed public support for such a referral: France, the United Kingdom, Luxembourg, Argentina, Australia and South Korea. The Obama administration, however, has failed to publicly support such a referral for Syria, despite the administration’s repeated calls for accountability. Between assertions that Russia’s opposition would be insurmountable and that they prefer to “work with Syrians, with people in the region, with international players [towards] establishing some kind of hybrid, or mixed court”, the administration has yet to make plain where it actually stands on an ICC referral.

Even if a chemical weapons deal is reached, there is little reason to believe Assad won’t continue to use conventional means to slaughter his own people unless that deal also includes an ICC referral. This is why the time has come for President Obama and Secretary Kerry to make good on the commitment to ensure there is “accountability for those who would use the world’s most heinous weapons against the world’s most vulnerable people” and come out strongly in favor of an ICC referral.

A referral to the International Criminal Court won’t immediately put an end to the atrocities, but it would send a clear message to all sides that grave crimes of any kind will not be tolerated and carry serious consequences.