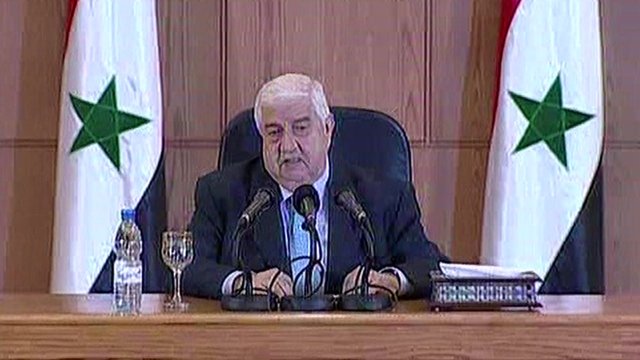 Syrian foreign minister Walid Mualllem said no country in the world would use “a weapon of ultimate destruction against its own people.

He was speaking in Damascus after the US said there was “undeniable” proof of a chemical attack.

He said UN weapons inspectors had been unable to go to a second site because rebels could not ensure their safety.

The US and its allies are considering launching strikes on Syria in response to deadly attacks last week.

The UN has confirmed its inspection team has delayed its second trip to the Damascus suburbs by one day for safety reasons.

The UK is making contingency plans for military action in Syria, with UK PM David Cameron cutting short his holiday and returning to London to deal with the Syrian crisis.

In Damascus, Mr Muallem told a news conference that if a military act was carried out against Syria, the pretext of chemical weapons would be false, baseless and groundless.

A good number of Syrians, in particular those supporting the regime, believe the visit of the UN chemical weapons investigation team is nothing but a move to justify a military attack on Syria. The opposition, however, thinks that these visits will lead to some evidence being unearthed, proving that chemical weapons have been used against civilians by the Syrian regime.

Above all, fear and discomfort are palpable among those living in the capital. People are haunted by the possibility of a Western military strike on Syria, discussion of which is dominating the headlines of satellite channels.

“We, and thousands like us across Syria, will face any country that tries to attack us,” threatened a young man, pointing at his weapon, which he uses to protect his neighbourhood. “These are Syria’s problems and it is up to us, Syrians, to solve them.”

“They said the Syrian forces were the ones who carried out this attack. I deny this utterly and completely to [US Secretary of State John] Kerry,” he said.

“There is no country in the world that uses a weapon of ultimate destruction against its own people.”

The Syrian foreign minister also insisted the government was honouring all the pledges it made to the UN over access and protection for the inspectors.

On Monday, the UN inspectors said they had come under sniper fire as they tried to visit an area west of the city.

Meanwhile, Russia and China have stepped up their warnings against military intervention in Syria, with Moscow saying any such action would have “catastrophic consequences” for the region.