You are here: Home / News / US Defence Secretary Chuck Hagel says the US military is “ready to go” in responding to Syria

“We have moved assets in place to be able to fulfil and comply with whatever option the president wishes to take,” Mr Hagel told the BBC.

US Secretary of State John Kerry has said there was “undeniable” proof that Syria had used chemical weapons.

The UK is also preparing contingency plans for military action in Syria.

British Prime Minister David Cameron has cut short his holiday and returned to London to deal with the Syrian crisis.

A good number of Syrians, in particular those supporting the regime, believe the visit of the UN chemical weapons investigation team is nothing but a move to justify a military attack on Syria. The opposition, however, thinks that these visits will lead to some evidence being unearthed, proving that chemical weapons have been used against civilians by the Syrian regime.

Above all, fear and discomfort are palpable among those living in the capital. People are haunted by the possibility of a Western military strike on Syria, discussion of which is dominating the headlines of satellite channels.

“We, and thousands like us across Syria, will face any country that tries to attack us,” threatened a young man, pointing at his weapon, which he uses to protect his neighbourhood. “These are Syria’s problems and it is up to us, Syrians, to solve them.”

Syria’s allies, Russia and China, have stepped up their warnings against military intervention in Syria, with Moscow saying any such action would have “catastrophic consequences” for the region.

His government has blamed rebel fighters for the suspected chemical attack, which took place on 21 August near the Syrian capital Damascus, and reportedly killed more than 300 people.

On Monday, United Nations chemical weapons inspectors were fired on while investigating one of the five alleged attack sites around Damascus.

Mr Hagel said the US Department of Defence had provided President Obama with “all options for all contingencies”.

“He has seen them, we are prepared,” he told the BBC’s Jon Sopel, adding: “We are ready to go.”

Mr Hagel said that intelligence currently being gathered by the UN inspectors would confirm that the Syrian government was responsible for the chemical attacks in last week.

“I think it’s pretty clear that chemical weapons were used against people in Syria,” he said. 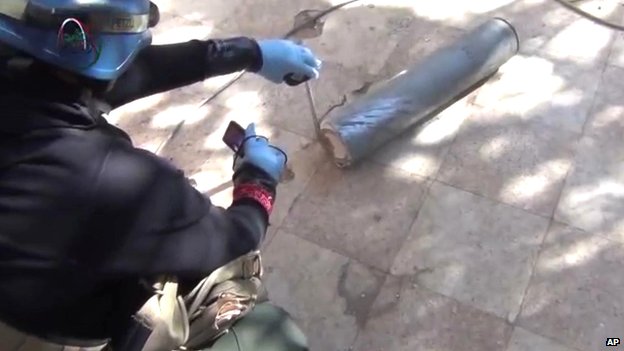 “I think the intelligence will conclude that it wasn’t the rebels who used it, and there’ll probably be pretty good intelligence to show is that the Syria government was responsible. But we’ll wait and determine what the facts and the intelligence bear out.”

Mr Hagel’s remarks come a day after Mr Kerry accused the Syrian government of destroying evidence of its chemical weapons use in Damascus by shelling the area.

He said his administration had additional information about the attacks that it would make public in the days ahead. Mr Kerry described the assaults as a “moral obscenity”.

“What we saw in Syria last week should shock the conscience of the world. It defies any code of morality,” Mr Kerry said at a news conference on Monday.

The UN Security Council is divided, with Russia and China opposing military intervention and the UK and France warning that the UN could be bypassed if there was “great humanitarian need”.

But Russian President Vladimir Putin said there was no evidence that an attack had taken place or who was responsible.

The UN says more than 100,000 people have been killed since the uprising against President Assad began more than two years ago. The conflict has produced more than 1.7 million registered refugees. 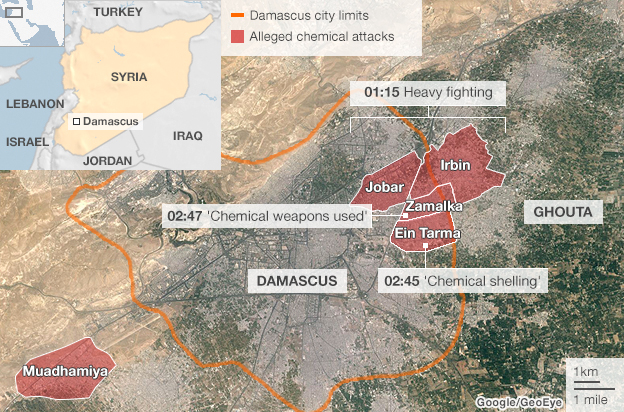