(Washington, DC) – The Syrian military has used air-delivered incendiary bombs in at least four locations across Syria since mid-November 2012. The conclusion is based on interviews with four witnesses and multiple videos analyzed by Human Rights Watch.

The Syrian military should cease its use of incendiary weapons immediately. A total of 106 nations have prohibited the use of air-delivered incendiary weapons, which cause serious burns, in populated areas, but Syria has not banned the weapons. 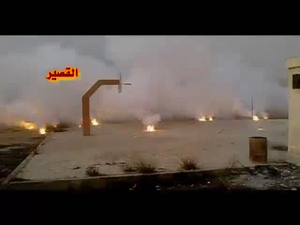 A video posted to YouTube by activists from Quseir, Syria shows ZAB 2.5 incendiary submunitions burning in the playground of the Ghaleb Radi school following an airstrike on December 3, 2012.
© 2012 Private

Incendiary weapons can contain any number of flammable substances, including napalm, thermite, or white phosphorus and are designed to set fire to objects or to cause burn injuries. They are not chemical weapons, which kill and incapacitate by the toxic properties of the chemicals released.

Incendiary weapons produce extremely painful burns, often down to the bone, and can also cause respiratory damage. The burns are difficult to treat, especially in conflict areas lacking adequate medical facilities, and the treatment itself can be excruciating. Permanent scarring and disfigurement can lead to social ostracism. Incendiary weapons also cause fires to infrastructure due to their broad area effect, which means they cannot be used in a way that discriminates between soldiers and civilians in populated areas.

Since mid-November, the use of incendiary weapons has been reported in at least four locations: Daraya in Damascus, Maarat al-Numan in Idlib, Babila in Damascus, and Quseir in Homs. An activist told Human Rights Watch that four adults, including two Free Syrian Army (FSA) fighters, were wounded during an airstrike using incendiary weapons in Maarat al-Numan on November 28. According to two local activists and video footage, approximately 20 civilians including women and children were wounded on December 3 by an airstrike on a school and neighboring homes in Quseir that apparently involved incendiary weapons. A home in Daraya also appears to have been hit by incendiary weapons, based on local residents and footage reviewed.

Human Rights Watch is investigating unconfirmed reports of the use of incendiary weapons in other parts of Syria. 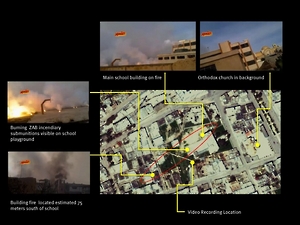 Human Rights Watch has identified remnants of at least two types of air-dropped incendiary bombs on videos recently posted by activists. Markings on the remnants identify them as ZAB-series incendiary aircraft bombs (Zazhigatelnaya Aviatsionnaya Bomba) made by the Soviet Union. The first type is a ZAB-100/105, a 100 kilogram (220 pound) bomb. The second type is an RBK-250 ZAB-2.5 bomb that releases 48 incendiary ZAB 2.5 submunitions over an area the size of a football field. The specific type of substance contained in these submunitions is believed to be the flammable substance thermite, according to a technical analysis provided by the independent arms expert Nic Jenzen-Jones. Thermite is used only for its incendiary effect and not for marking, obscuring, illumination or other purposes.

Reported Use in Daraya in Damascus

Based on the account of a witness, the first documented use of an incendiary weapon occurred on November 16. An activist in the Damascus suburb of Daraya, which had been heavily bombarded by Syrian forces in recent weeks, told Human Rights Watch that he filmed several videos showing ZAB incendiary submunitions being dropped on Daraya:

Warplanes began bombing Daraya with these flammable bombs on November 16 – that was the first time we saw these bombs. I saw MiG warplanes releasing small bombs that would catch fire while they were still in the air and keep on releasing some kind of gas (sic., smoke) after it comes in contact with a building or ground. The gas-like material it produces has a very bad smell, like an acidic, metallic smell…

On December 1 at around 10 a.m., I was with other activists in the media center when we heard a MiG warplane circling above us. When we went outside, we saw the warplane releasing a very big bomb, which produced an explosion, and then the bomb released things like fireballs producing smaller explosions. I saw four of these fireballs. One of the fireballs hit the street right next to the media center, just 50 meters away. The destruction wasn’t very big as it hit the street, but it did cause a hole to burn in the street.

A picture of the “fireball” that fell next to the media center on December 1 clearly shows the remains of a ZAB-2.5 incendiary submunition. According to the activist interviewed by Human Rights Watch, a MiG airplane released incendiary weapons again on December 2 on Daraya. He filmed footage from that attack, which according to him caused no casualtiesand posted a video showing a residential home on fire. Both the RBK-250 bomb as well as the ZAB-2.5 submunitions are visible in the footage.

Three other videos uploaded by the same Daraya YouTube channel “Daraya4Media,” associated with the Local Council of Daraya’s Media Center, also show the remains of burned-out incendiary ZAB submunitions in what appears to be a residential neighborhood. An apartment burned by the submunitions is visible in the video.

Reported Use in Maarat al-Numan town in Idlib

I was in Maarat al-Numan when the three attacks occurred on November 20, 21, and 28. November 20 was the first time I saw this kind of bomb being used. They are very strange: they ignite in the air and in turn produce fire before they reach the ground.

On November 28, I saw a MiG warplane dropping a big bomb that split in half, causing a big explosion. We thought that was it, but then we saw smaller bombs light on fire just a few meters after the canister released them. The fire bombs were falling quickly. The bombs did not fall in the same place: they spread over about 200 or 300 meters. When the bombs hit the ground we heard a series of small explosions. Then when we went to see the area of impact we saw the bombs producing white smoke.

Some of the [bomblets] fell on the streets between the buildings and others fell in empty fields. Four people were wounded in the street: two civilians and two FSA soldiers.

Reported Use in Quseir town in Homs

A video uploaded on December 3 from the town of Quseir in Homs province shows what appears to be an airstrike involving incendiary submunitions filmed from a distance while another video shows burning ZAB-2.5 submunitions on the ground of Ghaleb Radi school in the center of Quseir. Both videos were uploaded by the YouTube channel “qmediacenter” of the Quseir Media Center. Using satellite imagery, Human Rights Watch has located the school shown in the video.

The bombs hit a school called “Ghaleb Radi” Al Rifiat and several residential buildings next to it. The bombs were different than the cluster bombs. They caught fire as they were going down from the MiG warplane. I heard a big explosion and several smaller ones. We saw smoke in the air and when we arrived to the Al Rifiyat street I saw at least nine houses on fire.

Then when I reached the school I saw at least seven bombs burning on the playground and releasing white smoke that had a terrible smell. People were helping the families in the buildings that were on fire. When I went to the field hospital there were at least 20 wounded people that included women and children. I saw at least three of them severely burned like I have never seen before.

The houses of Al Drisse, Ismael, and Rahmet were burnt. Members of the families I listed were among the injured people. I saw three of them burnt. I am sure that there was much more but I clearly I remember I saw a 17-year-old boy with burn in his back, an older man with burn in his left leg and his chest but from the right side. The third case was also a man but I don’t clearly remember where his injuries were. The three of them were from one of the families.

According to the activist, there was no activity by the armed opposition group, the Free Syrian Army, in the school, a single-story building. A second activist from Qusair confirmed to Human Rights Watch that at least 19 civilians were injured in the strike, and at least eight homes were severely burned by the incendiary submunitions.

Reported Use in Babila district of Damascus

A video apparently from the Babila district of Damascus posted on December 3 showed a Syrian warplane circling overhead, and then showed the remains of an RBK-250 ZAB-2.5 canister near an apartment building on fire in a densely built-up area, with burning ZAB 2.5 submunitions visible on the road adjacent to the burning apartment building. Throughout the video, the cameraman repeatedly states that he is filming in Babila district of Damascus, and the video was uploaded with an Arabic emblem with “Babila” superimposed.

Reported Use in Other Locations

On December 6, a video posted by the official YouTube channel of the Deir al-Zour Press and anothervideo posted by “derrevolutio11,” both organizations associated with the opposition, shows the remnants of several RBK-250 bombs as well as burned-out ZAB 2.5 submunitions. Human Rights Watch has no further information about the location of that strike, although a video posted by activists claims to show a helicopter-dropped ZAB munitions strike in Deir-Zour.

A unitary ZAB-100/105 bomb that was air-dropped but apparently failed to explode was reported by the camera operator to have been filmed in al-Bab in Aleppo district, in what appears to be a populated area. The video was posted on November 29 by “albabforall,” a YouTube channel frequently used by video activists in al-Bab.

Another video posted to YouTube by “AENNetwork” on November 21 showed remnants of RBK-250 canistersand a ZAB 2.5 incendiary submunition reportedly found in the village of Qobtan al-Jabal in Aleppo province.